This week, President Ross thanked those members who attended the council meeting on the 9 May, at which the city considered granting the National Cartoon Gallery a 20 year lease on the Bunker building. The upshot was that the councillors approved the lease on the basis that the Gallery be predominately used for displaying the Cartoon Collection; a great result!

Bob Carle gave us some information on the Repco Around Australia REtrail event that he will soon take part in. The event re-stages the famous 1979 event by Peter Brock. Bob’s going to have his work cut out for him.

President Elect Paul McLeod reminded members of the District Assembly being held this Sunday and discussed with the club the opportunity to hosting a Rotary Youth Exchange student. Perhaps we can do this with Daybreak club on a similar arrangement to our hosting of Bianca. Members are asked to consider this and come back to Paul with your thoughts.

President Ross advised members that following the boards discussions with the C.ex the C.ex has agreed to run the Cycle Challenge under the club’s banners this year. The date will be either the 20th October or the 27th. Rotary will assist with the preparations on the Saturday and Sunday and for that the C.ex will make a donation to the club. The major sponsors will again be the C.ex and McDonalds. The other sponsors from last year will again be approached to assist.

We didn’t have a formal guest speaker this week so Mike Blewitt was asked to tell us a little bit about the 30th anniversary of the founding of local employment services provider ETC of which he was the founding Chairman. Mike showed us a short video prepared by ETC celebrating this milestone. Mike also told us about his family holiday in South Africa, together with family snaps, particularly their adventures in one of the game reserves.

President Ross again called for volunteers to assist with the Red Shield Appeal to be held on 25 and 26 May. We are short of people to help so if you can spare an hour or two please give Ross or Secretary Geoff a call. We have done this in the past and the club would like to have a full roster to help our again this year. 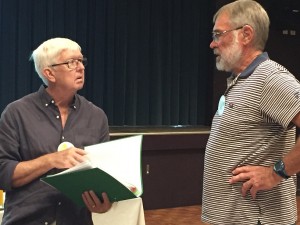 Geoff and Brian hard at work 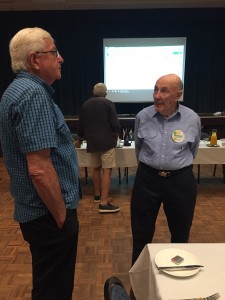