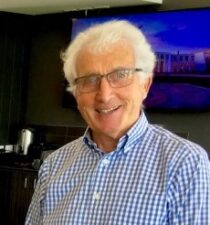 Info: Graham, Tell us a little about yourself. I grew up in the regional New Zealand city of Wanganui on the west coast of the North Island (two hours north of Wellington). I was a very active participant in rugby, cricket, athletics, and cross country running, lucky enough to participate at representative level in all sports, and at a national level in cross country running. From a young age, I aspired to be a surveyor. To pursue that vocation, I had to attend the School of Surveying at the University of Otago in Dunedin. (Graduating at the end of 1969). While in Dunedin, I was a part time mountaineer with the Otago Alpine Club. Throughout 1969, many New Zealand newspapers regularly featured job advertisements for surveyors in Australia. I applied for and snagged a job with a surveying and photogrammetric firm in Brisbane commencing in March 1970. After graduation, for 3 months I worked as a prospector in the Southern Alps of NZ to earn enough money to pay for my fare to Australia. 1971 involved a transfer to the Hunter Valley, and in 1973, my wife and I headed off to UK and Europe for a 12-month working holiday. Whilst overseas, I received an offer to join a partnership in a surveying practice in Coffs Harbour commencing in March 1974. In 1987, my consulting firm, Lockett and Montgomery merged with the national multidisciplinary consulting firm known as GHD. I remained with GHD in various management positions until 2004, during that period taking on senior management roles in the Hunter Valley and eventually North Queensland overseeing 140 staff, 8 professional disciplines & a territory of 2.5 million square kilometres. I returned to Coffs Harbour in 2004 and undertook a variety of small development projects on behalf of our family. Along the way, my first marriage produced 4 children, but sadly ended in 1984. I met Carol in 1993 and we married in 1997, triggering the reciprocal step-parenting of our respective children. Vocationally, I now practice as a project manager on a part time basis. I also have an interest in a small development project in the Hastings Valley. Why did you join Rotary? In August 1986, after discussions with members of the Coffs Harbour Rotary club, I decided it was time to make a structured contribution to community service. I jumped at the opportunity to become a charter member of Coffs City Rotary particularly because of the youthful energy that existed amongst the other (prospective) charter members. I was the inaugural bulletin editor. Two years later, I took on the role of club president, and it was that year that John Champion and Tom Hamilton-Foster came up with the crazy idea that our Club should initiate and host an annual Cartoon competition. The rest is history. If you could only keep five possessions, what would they be? My photo albums and scrapbooks. My 10 favourite books. My mobile phone. My mountaineering rope. My Passport. How do you spend your free time? These days, I spend a lot of time with my grandchildren and their parents. I also continue studying at both a formal and informal level. My exercise routine currently involves recreational tennis, exercise classes, daily walking, and trekking when time permits (including, a few years ago, to and from Everest Base camp). What are your top three favorite books or movies and why? My favourite movie is “Chariots of Fire”, principally involving 2 British athletes running in the 100 metre and 400 metre races at the 1924 Olympic Games in Paris. The movie was a wonderful representation of teamwork (in what is usually an individual sport), commitment, and determination to achieve one’s highest possible potential. Coincidentally, the bronze medal in the 100 m event at the 1924 Olympics went to a former member of my athletic club in Wanganui. My favourite book is “Longitude” by Dava Sobel, which recounts the epic quest (in an environment of political intrigue, international warfare, personal feuds and financial skullduggery) to solve the thorniest scientific problem of the 17th and 18th centuries, leading to the invention of the marine chronometer (and thus the determination of longitude at sea). It also demonstrates how a humble beginning in life is no impediment to success. My 2nd favourite book is “The Day of the Jackal”, a novel by English author Frederick Forsyth which follows an unnamed English assassin hired by a French paramilitary terrorist organization to kill France’s President Charles de Gaulle. It also highlights how luck is an extraordinarily significant part of life. What is a skill you’d like to learn and why? I would like to learn 3-D modelling to prompt my grandchildren into the world of spatial sciences. What in your life do you feel most proud of?” There are three answers to that question: Firstly, I am proud to have created a family, which for the most part has made a positive contribution to the community in which we live. Secondly, I am proud to have made a series of contributions (partly through Rotary) to the various communities in which I have lived which I believe have enhanced those communities. Thirdly, on a sporting front, I am proud to have received a silver medal in the (NZ) national cross country championships in the era when New Zealand was the world leader in middle distance running.