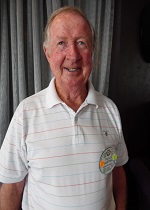 Coffs City Rotary is mourning the loss of one of our own.

Trevor Brentnall, a member of our club since 1989, passed away suddenly last week. His absence leaves a hole in his family and in our club.

Coffs City Rotarian Mike Blewitt was able to speak at Trevor’s funeral on the club’s behalf, and we reproduce his speech in full below.

WOW, they say in politics a week is a long time, but it is the same in everyday life. This time last week Trevor was playing golf in Melbourne. Let me tell you about some highlights of Trevor’s 25 years in Coffs City Rotary Club. However before I do just let me tell you this story about Trevor: Helen & Athene met at ITC (International Training & Communication). When I asked Trevor one day at Rotary what ITC stood for he said; it’s a ladies club and it stands for I Talk Continuously.

Trevor joined Coffs City Rotary on 1st December 1989 when Graham Lockett was President. We put him straight to work the following year under President Shane Healey as Director of Youth Services. One extract from Trevor’s report that year was about our club debate with Coffs Harbour High School. The Subject to be debated was “Youth is NOT wasted on the young”. His only comment about our performance was “the less said the better.” We were against Courtney Sheehan, Ruth Brebner & Janine Jessup. What hope did we have? Note no member’s names were listed.

Trevor and Athene as you would be aware were great travellers, being away overseas every year or so and in 1996 had been to Turkey. Trevor was really taken with the Turkish Fez (cap) so at his changeover all of his new board were presented with a fez, which was a great photo opportunity.

I am sure everybody is aware that Trevor loved his red wine, which he always decanted from the bottle. I remember on one of our early visits to Oxley place Trevor, being the great host he was, gave me first taste from the decanter. Realising I should not let the moment pass I swallowed then shuddered. Trevor exclaimed “what is wrong with it?!” I said you should not pass off your bad wine in a decanter. He quickly salvaged the bottle from the kitchen to prove it was a very good wine. I noticed the next time we had wine the bottle was always beside the decanter.

In 1997 Trevor was Chairman and with Athene’s assistance did an excellent job with “Hope for the Children Foundation”. They gave support to 65 Families covering 290 children.

He was also on the Club Ball Committee, celebrating the Arthur Street Overpass Opening. The Ball was attended by 300 guests, closing the highway for 30 minutes that night; a feat that may be more difficult in 2015.

During the 2010/11 Rotary year Trevor (in conjunction with Kath Lindsay from Lifeline) ran a hugely successful Mental Health Forum with focused on depression and a record nearing 600 people attended over the course of the two days.Trevor being a fan of the cartoonist Alan Moir in his beloved SMH was delighted to join the Board of the Bunker Cartoon Gallery.

He was also on the Buskers committee. You may recall that our club started the Buskers festival under Mike Rabey’s presidency.

Trevor always had a positive approach to everything. In golf it was “my new driver will go further”, “the next putt will go in the hole”. When it was his turn to shout he would say “that beer was beautiful. I’ll buy another as I have a feeling it will be better than the last”.

One of our Club’s annual activities was visit to Ozanam Villa for an indoor bowls competition. We had a 100% record of being defeated by the residents and at the presentation Trevor said “In 10 years of competition one can only say we have aged, we certainly have not improved.”

Trevor enjoyed Rotary. He was a great contributor to our Club and will be sorely missed by ALL.

Trevor’s passing leaves behind over two decades of fond memories; of good times, good deeds and good will.

Vale Trevor Brentall. We will miss you.