We shook a few members up this week by moving down the corridor and around the corner; holding our meeting in the C.ex Blue Room rather than our usual Rendezvous Room.

We were fortunate enough to have our National Youth Science Forum attendee Josh Leckenby return to give us an update on his adventurers and Josh didn’t disappoint:

Although it has been many months now since I attended the National Youth Science Forum in Canberra, the NYSF experience has far from finished.

Over the last two weeks during my school holidays I have been able to attend two of the NYSF next step programs; Melbourne and Brisbane. Both these programs gave the 130 attending students the opportunity to visit the cities’ universities and science-related industries. It was quite adventurous to be able to have an in-depth look into some of the highest ranking universities in the country, gaining an inside perspective of each institution and what they offer. It also allowed us to have personal conversations with current students, postgraduate researchers and academics about specific establishments in relation to our personal plans for our tertiary studies. We also were invited on lab visits and lectures at many of the industry partners. My personal favorite would be the pharmaceutical company GSK which make a wide variety of medicine from toothpaste to vaccines as well as the branded paracetamol panadol. The Post-doc researchers at GSK gave us a very engaging presentation on their 30 year project of a malaria vaccine which should be released next year. What really amazed me was this particular project is not for profit design and no patents will be put on the vaccine design. They also gave us a guided tour of their top security sterile facilities which was a very special opportunity.

Although the next step program was amazing on its own, NYSF also offer a variety of international programs. I was honored to be given the opportunity of a position to attend one of these programs, the London International Youth Science Forum. The forum consists of two weeks in London, staying on the campus of the Imperial College London, the 3rd highest ranking university in the world. During the forum itself we interact with 450 students from 60 countries around the world while attending lectures from world leading researchers, visits to the top British universities including Oxford and Cambridge as well as many trips to laboratories and industry partners. This is an extraordinary opportunity in its own,  but it doesn’t quite end there. LIYSF also offer an extention week on top of the forum which is spent in France and Switzerland. This includes an entire day with the PhD students and postdoc researchers at the Large Hadron Collider in CERN finding what actually happens at the forefront of research physics. It also has a dynamic cultural emersion with many rare opportunities such as a formal dinner atop the Eiffel Tower.

Unfortunately it isn’t quite as simple as getting on plane and flying to London. Part of the conditions of the trip is for the $13,500 bill to be paid for by donations and fundraising events. Currently I am organising a night golf game played with glow in the dark golf balls and glow sticks on the flags, I’m sure you can imagine. It should be a bit of a novel event and a lot of fun. I hope to see you all there.

I could probably speak to you for another few hours about what the NYSF has been able to offer many regional students around Australia. But it all comes back to you as Rotarians for organising and support such an program. I would like to thank you again for the opportunity you have given me personally as well as many other young scientists to pursue their passion.

It was (as always) a pleasure to hear from Josh and we’ll keep you posted on his planned night golfing excursion. 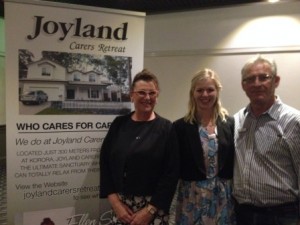 Our guest speaker this week was Ellen Slater, the proprietor of Joyland Carer’s Retreat.

Ellen cared for her grandmother in her early life and later cared for her brother. Ellen’s mother struggled with mental illness and her husband suffered from debilitating illness. As a result she was drawn to work as a family therapist and later worked for Carers Queensland.

Ellen’s dream though was to establish a place where carers could seek respite and relax, so she moved to Coffs Harbour with her partner Axel and established Joyland Retreat.

Joyland provides a bed and breakfast service, together with counselling and relaxation sessions. A massage therapist is available if desired.

Ellen’s talk was an eye-opening look into the realities of life for carers and the difficulties that come from the meagre funding that is available. We thank Ellen for her visit.